It All Comes Down To... (The Story of Production Night)

I walked into the auditorium of Erasmus Huis and stared at the tiny stage. It was all what it came down to.

It was not one bit easy for me to make it to that point. It wasn't easy for all of us. Though we had done it before, there was a lot of apprehension over the fact that we could not do it again. People doubted us, and it made a lot of sense. It looked to be falling apart and dwindling to the ground. It was falling apart and dwindling to the ground. However, there was no turning back. We had no choice. Somehow, we had to make it work. Somehow.

Upon my return to Raffles PSB Singapore School, I was already given a job. Who would think that a returning student who had not even sat for his first class would have already been appointed as Director for the school's upcoming Christmas production? I had rejoined the school just in time for their second production of 'Dr Susses' How The Grinch Stole Christmas'. It seemed absurd that of all plays, we had to do this one. Why couldn't we just do a play with perfectly human characters? What seemed even more absurd was that we were doing this with a school of practically 200 people, that figure inclusive of all students, teachers and non-teaching staff from all levels. Then again, we had done it before.

We staged a production of 'The Wizard of Oz' literally in 15 days. 15 days of sleepless nights and continuous rehearsals was what it took to stage, despite circumstances, a spectacular show. What I learnt from the last production's experience just before I left the school about two years ago was the true meaning of the line of poetry "when there is a will, there is a way." So, with that said, I guessed that that time should have been no different. I know how to have a will and thus, there is a way. This thing was going to happen, one way or another.

So, there was no turning back and we had to make it work somehow. When there is a will, there is a way. Yet, at the half way point, just under two months into the process of rehearsals, we deemed it true that it was not going to work and there was no way. It was a project deemed hopeless.

At one point, I turned to Ms Diana, the teacher who was my fellow Director, and told her that I could take it no more. I kept asking myself why I was doing it all in the first place. Then again, it was, and still is, my love for the school that kept me going. I had to repay what the school had done for me and my future with more than just tuition fees. I have to show them in my short three-month return not only what I had learnt in the previous school but also how all that I had learnt in my first four years in PSB has helped greatly.

I decided to step up and fulfil my duty to simply make it happen. On top of that, I decided that I would make sure it happened with quality that I am proud of. It's not that someone came to me and motivated me to not quit. I really did want to end it all. I wasn't getting paid to direct the production and it all only seemed not worth the time and sacrifices. But somehow, I couldn't leave. I just could not help but finish what I stated. I didn't want it to haunt me for the rest of my life. On top of it all, I didn't want to disappoint everyone. It was just easier to move on than to quit.

So the day came. It was really happening. Three buses of performers pulled over. The students skipped up the flight of stairs to the second floor and took their seats in the auditorium based on their performing groups. Their smiles shined so brightly and their laughter filled the air with glee. Their emotional state was contrary to mine that was filled with fear and anxiety.

The day had just started and things were already off to a rough start. The show was scheduled to start at three and the time was already nine. The usually heavy traffic of Jakarta's morning rush hour caused the buses to be late. Tardiness was not a common problem in our school and we had not expected it to ruin our day's plans. Almost the entire cast raised their hands when asked who needed to go to the toilet when the toilet could only accommodate so many people at one time. The children were very hungry and a time had not been found to allow them to eat the countless boxes of food the parents had generously provided for us. Major props had yet to arrive. The boy who was supposed to play Max the Grinch's dog was still at home trying to recover from a fever that just seemed to get higher and higher. Worst of all, a dry run had yet to be done with the entire cast on the actual stage for the first and last time.

It was unimaginable. The tension was way too tense. Disaster had already lurked at my heels. I looked around and saw what my pessimistic mind envisioned. Everything was just not right. Then, as things got worse, so did the stress of it all. People were screaming and scolding each other over problems that were not even clear. Innocent little kids came up to me to ask appropriate and well educated questions only to get scolded by me because I didn't have the time to spare the few seconds needed to appreciate and understand. I would scream in their faces saying things like "Don't come to me for these kind of petty things!" or "Not now, I don't have the time for you. Figure it out yourself or ask Mr X or Ms Y." I would yell in their faces and leave them just like that. Even if deep down inside I wanted to help, I just could not. I had far more major and disastrous matters to worry about. In the rapid race against time, we probably weren't thinking when we were working. We were running around like headless chickens. One teacher asks a boy to go to the make-up room to get his make-up done before wearing his costume and on his way to the make-up room, the boy bumps into another teacher telling him to do the exact opposite. Imagine the confusion this nine-year-old boy is faced with. Imagine the chaos and disorder caught in all the drama and desperation.

However, one thing still surprises me to this day. I can scold a PSB, I can starve a PSB in the name of lunchtime one-on-one script reading, and I can even scream vulgarities in the face of a PSB, and yet, they still appreciate me. They still respect me whole hearted and hold no grudge on me. They understand me and can read my true intentions that are hidden way deep down inside and they read that it is good. I don't get a group of people like this to work with in any other institution and for that, it is one quality of a PSB that I truly do admire and appreciate.

***
In the rush of it all, somehow, we come to a stage where everything was ready. Everyone miraculously appears in the back stage holding room all properly seated based on their performing groups and all neatly dressed and made up. All eyes are on the two directors standing in the middle of the room and absolute silence is heard for the very first time that day. It was a moment that was the anomaly that day. The moment was an opportunity to finally catch my breath after hours of mayhem. We gave our final instructions and composed ourselves into prayer which, compared to the rest of the day, was a moment of great peace and tranquillity.

Then, it was show time!

As every line was uttered, I followed my script that was scribbled with instructions all over it. The play progressed line by line and as each line was recited, I thought of how many times that line had been rehearsed. Writing each line of the script was a painstaking process. Some lines were the results of hours and hours of careful consideration and thought. I pondered over certain phrases over my weekend, thinking of how to make this short phrase rhyme and fit just right. It takes hours for the line "The best who of the year will be given the once-in-a-year honour to light up the Who Christmas Tree" to develop into "The best Who of every year, will be honoured to light up to tree with holiday cheer!" just to make it rhyme. Then, it takes rounds and rounds of rehearsals and one-on-one script reading to perfect that one line. A lot goes behind one line. A lot of hard work and attention to detail goes behind making that three-second moment just a little more special. All the countless hours of preparation came down to only 120 minutes of each our lives.

When the intermission finally came about, I had the chance to mingle with the audience. To see smiles on people's faces and to hear positive reviews on what had been showcased up to that point finally gave me a sense of comfort and relief. It warmed the heart. However, what was even more touching was just seeing who was there. Everyone's family was there. The Grinch's grandmother who was in a wheelchair took the effort to see her grandson perform. Down to those who worked off stage, be it the props people or even the ushers, their parents were all present to support us, along with the extended family. Former teachers, alumni and down to the spouses of the teachers all came. It was the entire family of the school. Everyone was involved in one way or another, and that is what makes it so special and rewarding.

I leave the school with an experience like none other, feeling proud to have been, and still be, a PSB. 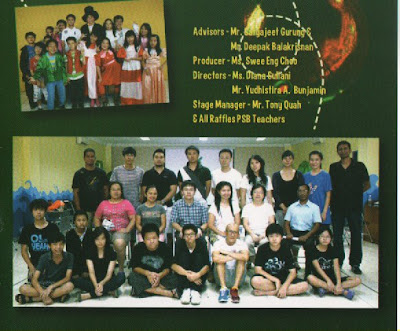 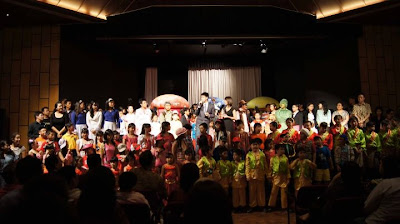 Check Out These Other Blogs!